Last Tuesday saw myself, Sylvia Edwards, Marion Blockley and Mike Davies from River Severn Custodians get together for an exploration of canal-related sites between Newtown and Pwll Penarth. Along this section the canal bed is dry and is now a riverside footpath. The spot above was a good starting point, as there is a section of the parapet of the last bridge before the original canal wharf now incorporated in to a garden wall (see close up below). We tried to locate the exact site of the canal basin, which appeared to be in the back gardens of a housing development.

We walked on along the path of the canal bed, past buildings that would have been on the canal-side, with distinctive architecture including these split level houses which can be accessed on the top floor at street level the other side of the wall. 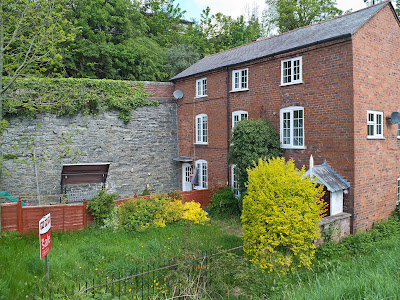 Heading towards the edge of town we passed the old pump house where water was drawn from the River Severn to feed the canal. The photograph below shows the back of the building, where the brick tower of the steam pump was sited. 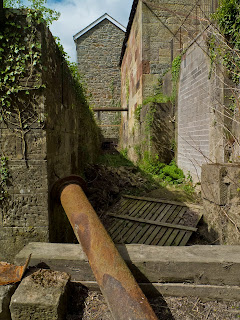 The proximity of the river and the canal bed as it leaves Newtown is striking. We imagined the contrast you would feel arriving in Newtown by narrow boat, between the open fields of the Severn valley and this close intersection of river and canal. The land cleaves and buildings cling to the steep incline with the road high above. I felt the importance of a canal terminus as it would give the canal its focal point, a sense of having achieved its journey.

We looked out for visible signs of the presence of the canal in the landscape and built environment, and the closer we looked, the more there were. After Llanllwchaiairn village we passed under a bridge along the dry canal bed. Later that day, in Newtown Textile Museum, I saw this postcard of the canal in water at what looked like that very site. 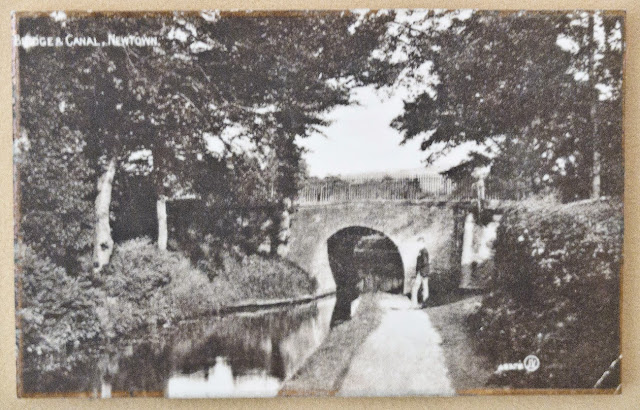 Further along we passed canal-side buildings, including a wattle and daub cottage, and another bridge, this one with an iron fish-bellied bridge deck.

What is Alternative Fieldwork?


Some fieldwork techniques have an instant appeal, such as pressing flowers, or throwing a quadrangle to monitor species population. Others involve transfer of material, such as brass rubbing, or making plaster casts of animal footprints. Fieldwork means different things in different disciplines, or 'fields' of enquiry. As an artist, or an enthusiastic amateur, you have the freedom to use, misuse and adapt techniques borrowed from archaeology, ecology or even ethnography.

So far I have mostly recorded my visits along the canal photographically, but I am keen to explore other fieldwork techniques with a connection to the history of the canal. A lengthsman was a canal worker employed to tend a two or three mile stretch between one village and another, keeping the towpath in good order, checking water levels and many other ad hoc duties. The lengthsman kept a notebook where all these day to day details were logged, a real 'field diary' of the minutiae of canal life and maintenance.

Canal mapping is another important discipline, with many beautiful examples to be found at the archives in Ellesmere Port (worthy of their own post when I get hold of some scanned images).

After the archaeological dig on the canal I have been thinking about ways to represent the finds (pottery shards, pipe fragments, molten glass etc) visually. It could be interesting to play with the conventions of archaeological recording and still-life photography.

On one of my many walks along the canal I photographed a kind of fern 'rock garden' growing inside a lime kiln on the canal-bank. I noticed the effect of the limelight, or 'lavender-light' as it appears to be, pouring in from above and hitting the fern-fronds. It would be nice to try setting up a still-life photograph inside a kiln, and make the most of this unearthly light.